Why is gravity so cheap?

Economics vs Sociology vs Psychology papers 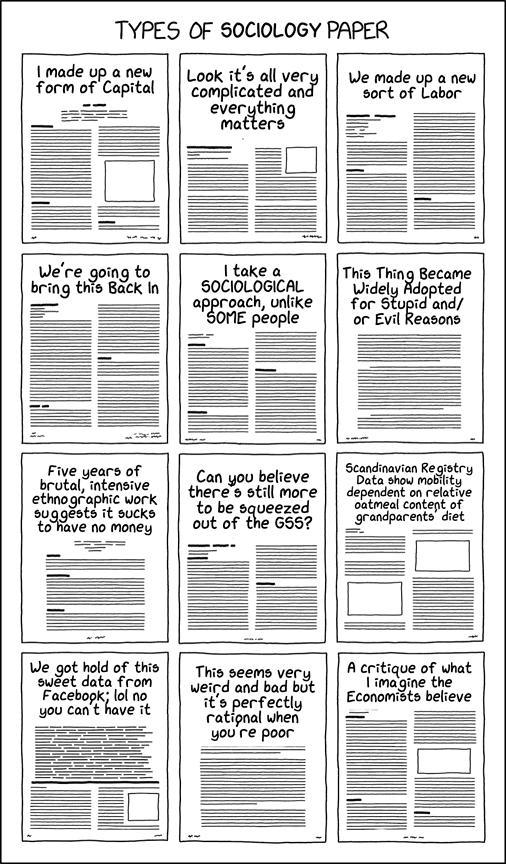 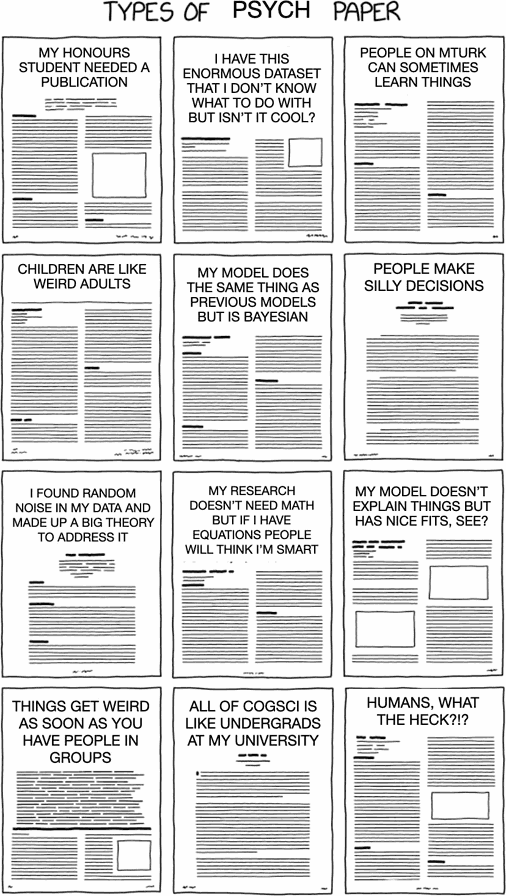 But wait, there is more… 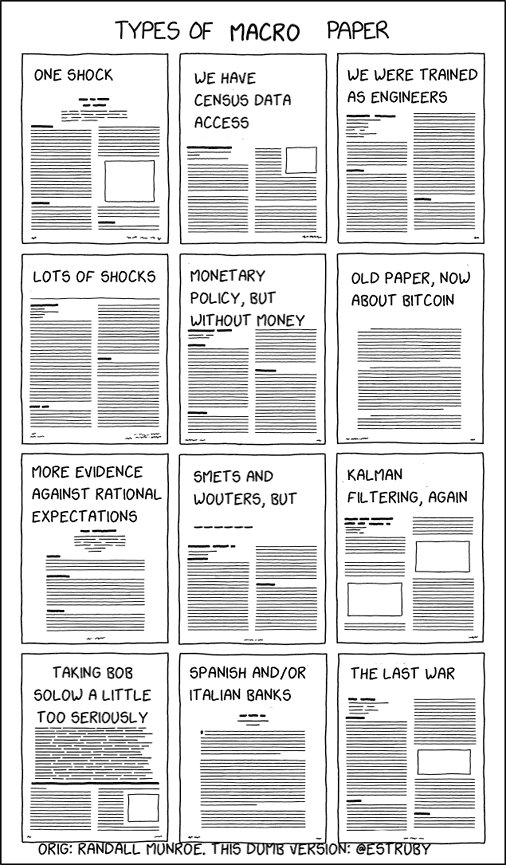 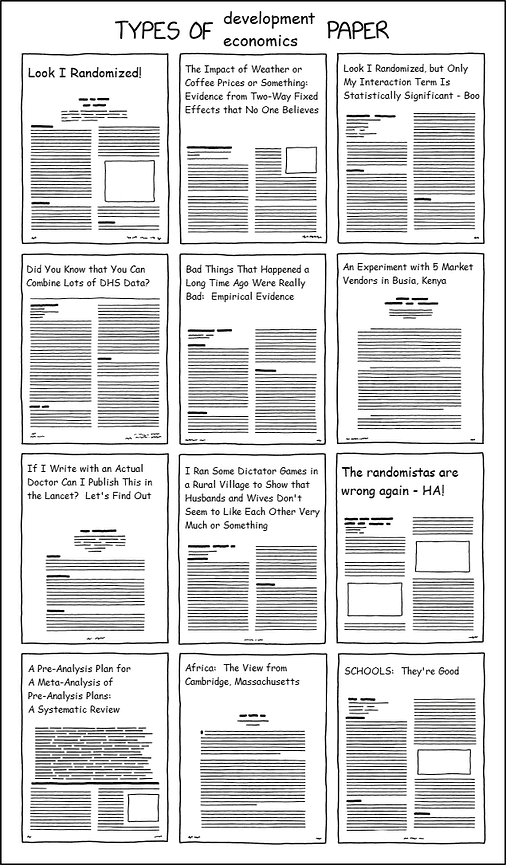 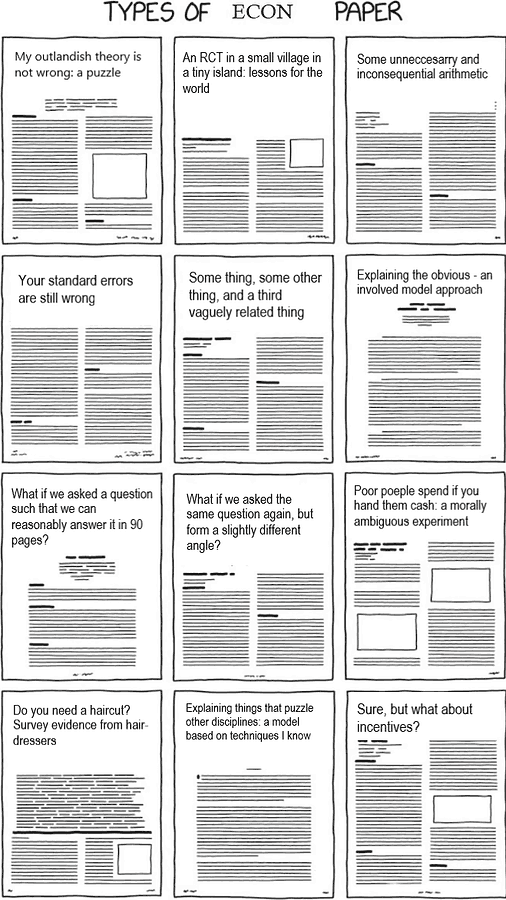 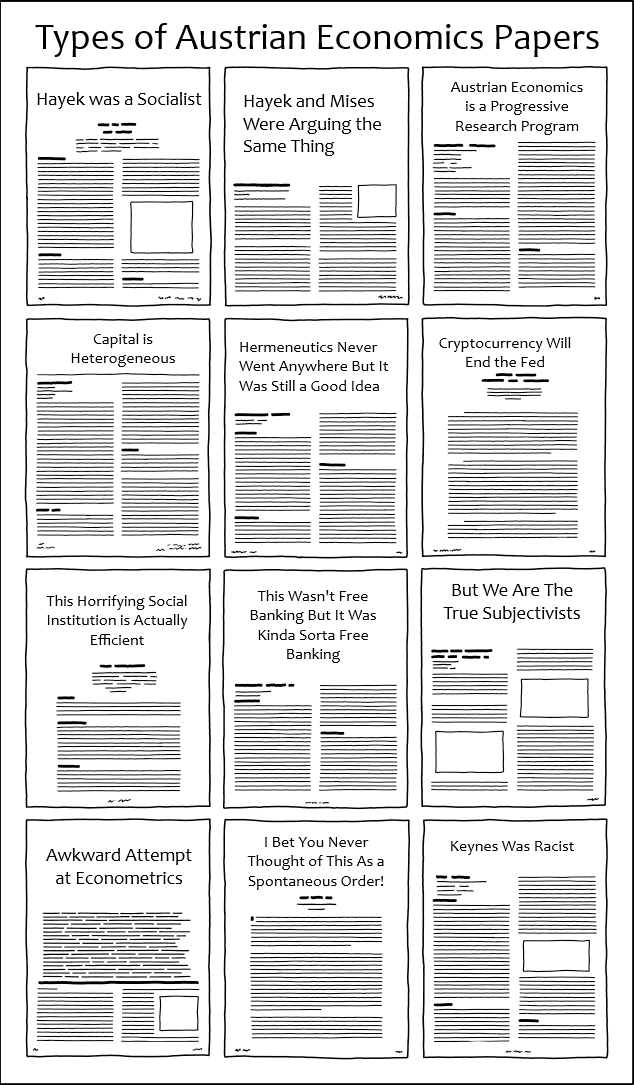 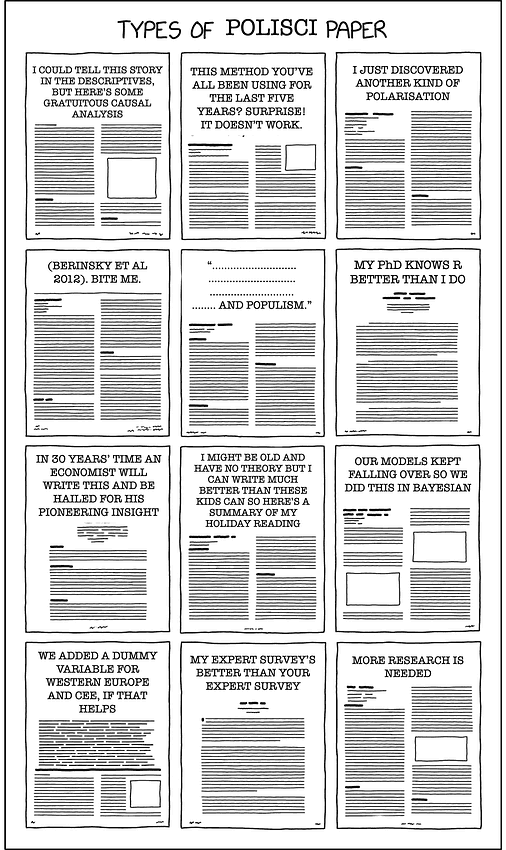 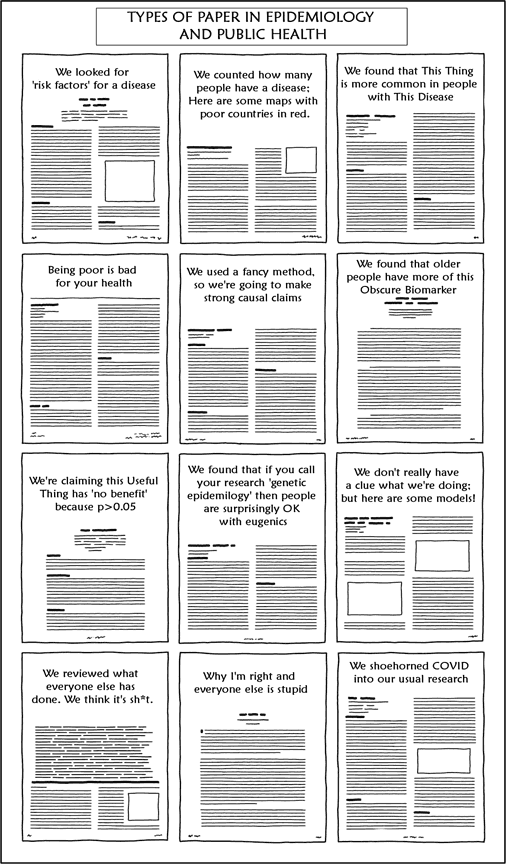 I feel there is a certain overlap in all these fields.

I have a joke about academic publishing.

Efficient grant hypothesis:
If your grant were worthy of funding someone would have already done so.
John Arnold

1776 and All That: A Short Guide to the History of Economic Thought

The Physiocrats built the first economic model to show that all the spare wealth should go to landlords who employed economists.

Hume thought that money was important because it made life easier.

Adam Smith thought that everything would be for the best if the government did not interfere with the economy.

Ricardo suggested that the government should stop interfering with the economy.

Say showed that if you make anything somebody will buy it. This is called Say’s Law.

Veblen said that if you want to flaunt it, you have to have it. He didn’t or hadn’t.

Walrus calculated that if everybody spent all their money on goods, they wouldn’t have any left. This is called Walras’ Law.

Pigou suggested that the government should take from the rich and give to the poor because the poor need the money more than the rich. Many economists, except very poor ones, felt that this was debatable. It was not pursued.

Marshall showed that if the price and quantity of a good stayed the same long enough to plot a point on a graph you could draw two lines through it. From a distance this looks like a pair of scissors and is called Supply and Demand Analysis.

Hicks stated that consumers tended to buy the goods they wanted most, if they could afford them. Many economists agreed although Samuelson suggested that it would be safer to check to see if consumers bought things they didn’t want instead. This is called Revealed Preference Theory.

Arrow proved that unless everybody agreed on something, somebody wouldn’t like it.

Keynes said that the government could interfere to make the economy run better.

Friedman said the government interfered with the economy and made it run worse.

Galbraith said the economy interfered with the government and they both ran worse (Galbraith is from Ontario).

Sir Roy Harrod said that the economy either carries on in the same way as before or it doesn’t. This is called the Knife-Edge Problem, and has been disproved.

Rawls believed that if nobody knew what he was doing garbage collectors would probably be paid more money. this is called Social Justice.

Coase showed that if nobody could break the law, then the law wouldn’t matter. This is called the Coase theorem.

Stigler noticed that cars sold for different prices, while Alchian observed that people sometimes line up. Stigler got the Nobel prize.

Cheung proved that if nobody could break the contract, then contracts wouldn’t matter. He wanted to call this Cheung’s theorem.

Becker noted that it didn’t matter what good you place on the quantity axis of a supply and demand graph.

Buchanan said that the government and the economy interfered with each other and neither could be made better or worse.

Ackerlof discovered that new cars are better on average than used cars, while Spence argued university graduates don’t know anything.

McClosky said there are no $500 bills on sidewalks … and he/she said it very nicely.

Merton and Scholes found a way to find $5 bills on the sidewalk, and quickly lost $4.2 billion.

Fogel showed that if railroads had never been invented, no one would have noticed.

North proved that pirates were bad, and getting rid of them was good.

Barzel showed that if customer’s squeezed oranges hard enough it was bad for the oranges, and sellers would try to stop it.

Allais proved you could win a Nobel prize with just a few numbers.

What do you call statistics where your motives influence the results of your statistical analyses?
Biasian statistics. Ulrich Schimmack

Shall we measure our cross-elasticity?

Are my expectations rational?

Let’s assume you, me and a ritzy hotel room.

Is that a supply curve in your pocket?

Your presence is one big positive externality.

What do you say to a little spatial-based modeling?

There are no diminishing returns with you.

I suggest you lower barriers to entry to encourage free exchange.

With you there is no reason to diversify my portfolio.

I love you, ceteris paribus.

Being your prisoner is no dilemma.

You maximize my utility every day.

Whoa, you’re the most robust model I’ve seen in a while.

I’m not indifferent towards those curves!

My interest in you has compounded continuously.

When I’m with you I experience hyperinflation.

You enjoy monopoly power over my heart.

You are unique, well, at least locally.

More of you is always better.

I’ll be capital, you be labor – you know the rest. 1stclasseconomics

Two economists walked past a Porsche showroom with an elegant sports car visible through the window:
First Economist: “I really want that car.”
Second Economist: “Obviously not.”

What is sweeter than honey?
Free vinegar.

Jose had robbed a bank in Texas and fled south across the Rio Grande with the Texas Rangers in hot pursuit. They caught up with him in a town in Old Mexico, only to discover that Jose spoke no English and none of the pursuers spoke any Spanish. They drafted one of the locals – the school teacher – to act as a translator.
“Tell Jose that he must tell us where he has hidden the loot from the bank robbery.”
“The gringos say to ask where you have hidden the loot.”
“Tell the gringos I will never tell them.”
“Jose says he will never tell you.”
The Rangers pull out their six-guns, cock them, and point them at Jose.
“Tell Jose if he does not tell us where he has hidden the loot, we will kill him.”
“The gringos say if you do not tell them where you have hidden the loot they will kill you.”
Jose begins to tremble with fear.
“I buried it by the old oak tree on the other side of the bridge.”
“Jose says he is not afraid to die.”
David Friedman

An economics professor is in a car driven by one of his students; she asks him to put on his seat belt.
“Why do you want me to put on my seat belt?”
“To make it less likely that you will be injured in an accident.”
“Then why don’t you take yours off?”
David Friedman

Q: What has economics ever done for us? Nothing!
A: Auction theory. Made billions of pounds for the British taxpayer, and billions more for Google (whose Chief Economist used to write econ textbooks)
Q: Yes, they gave us auction theory. That’s true. But…
A: Externalities! An understanding of how market forces can produce too much pollution and too little innovation, and what we might do about that.
Q: Obviously, auction theory and externalities. But apart from that…
A: National accounts. Measurement of growth and inequality. Winners and losers from changes to the tax system. Opportunity costs. Behavioural economics. How incentives shape behaviour. Field experiments to test policy. The design of systems to manage kidney donations…
Q: Yes, yes. But leaving aside practical statistics, fiscal analysis, market design, human behaviour, and a widespread application of the experimental method… what has economics ever done for us? Nothing!

Now that Richard Thaler won the Nobel Prize, he values it much more than he did before.
Jonathan Ladd

Why did chicken economicus cross the road?
To maximize utility.
Greg Rosalsky

Why did the child cross the road?
To get 2 marshmallows instead of 1, revealing great self-control and high potential for good life outcomes.
Katherine Milkman

Did you hear they’re designing a new car for economists?
It’s an MUV, a Maximize Utility Vehicle. But I guess an economist would tell you that theoretically everyone drives an MUV.

– all via Evan Nesterak at http://behavioralscientist.org

by Jeffrey A. Smith and Kermit Daniel

Every so often, you may find yourself a bit bored by the prospect of another evening at Jimmy’s spent talking only to your economist friends. After all, even stories about the faculty members’ children get tiresome at the third or fourth telling. In this situation, you might want to think about interacting socially with students in one of the University’s many other disciplines. Beware! If you attempt to do this without preparation, you will quickly find that you become lost in dense of fog of apparently random jargon, confusing rules for politically correct speech and dress, and general incomprehension.

To help circumvent this problem, we have prepared the ECONOMICS TO SOCIOLOGY PHRASE BOOK to help economists adjust their way of speaking in a manner that will make it comprehensible to Sociologists. We chose Sociologists rather than Political Scientists because the latter tend to be unpleasant, emaciated people with glazed eyes, while Sociologists are often entertaining and cute. Unlike Anthropologists, they can be invited to parties without much worry for the safety of the silverware, and their rhetoric, when treated like background music, has a pleasant, lyrical rhythm. Who knows? If you use the phrase book carefully enough, you might even end up engaged to one. To see how to use the phrase book, consider the sentence

Look up the word “need” in the Sociology column and replace it with the corresponding economics term, to form the translated sentence

Wasn’t that easy? Next time you want to talk to a Sociologist, or - perish the thought - read an article in a Sociology journal, just keep the phrase book handy and you’ll have no trouble at all.

…every November you celebrate Day of the Deadweight Loss.

Here are ten ways to tell you might be sitting next to an economist:

The economist’s standard reply after hearing positive results from some pragmatic policy initiative:
“That’s all well and good in practice. Let’s see how it works in theory.”

An economist and a friend were visiting the zoo. They stopped by the tiger cage, and the friend remarked that they looked so sweet, just like house cats. The economist said, “Why don’t you just reach in the cage and pet them? It will be okay.” The friend reached in, and one of the tigers attacked and tore his arm off. “Why did you tell me it would be okay?” The economist just shrugged. “My model assumed the tiger wouldn’t bite.”“Economists put decimal points in their forecasts to show that they have a sense of humour” — William Gilmore SimmsPsychologists are starting to use economists instead of rats in their experiments, for three reasons:
11 February 2015
21 January 2013
11 February 2012
28 April 2011
20 April 2011
9 February 2011
24 January 2010
14 February 2008